Clothing:
Wears a skin tight dark red body suit without sleeves. Over it she wears a tan jacket and a tan belt around her waist. She wears knee high boots with tan trim and steel noses. She also wears tan gloves with a band on each wrist. The Left wristband holds a small communication device. Finally she wears a metal headband that helps to aid with keeping her dreads out of her face as well as to hold her eyepatch in place. 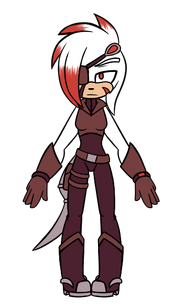 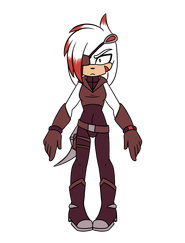 Kay's design in 2014
Add a photo to this gallery

Retrieved from "https://uncannys-creations.fandom.com/wiki/Kay-ti?oldid=5182"
Community content is available under CC-BY-SA unless otherwise noted.